On 28 of October 2021, the team of the Institute for healthcare studies (gewi) visited the nursing home “Deutschordens-Altenzentrum Pfarrer-Braun-Haus” in the SHAPES – Pilot Region Oberbergischer Kreis (OBK) together with team members of Kompaï Robotics and “Kompetenz.digital”. The purpose for the visit was to showcase the robot Kompaï, a robot already implemented in nursing homes in France. Kompaï can take on various tasks, such as night watch, entertaining residents, and disinfecting rooms, and is thus intended to relieve nursing staff and family caregivers.

Background: Within the SHAPES H2020 project the Institute for healthcare studies (gewi) supports the use of digital solutions for a healthy and independent life and analyzes the necessary social and structural framework conditions for a sustainable implementation in practice. The robot Kompaï is one of the digital solutions to be evaluated in one of the use cases of the SHAPES Pan-European Pilot Campaign – both in the home care and in nursing homes of the pilot region Oberbergischer Kreis. A second nursing home located in a further SHAPES pilot site in Greece will deploy Kompaï afterwards.

1. Night watch: the robot can support the nursing staff during the night watch, as it can detect persons lying on the floor via a sensor during its control rounds and trigger an alarm. This means that people who have fallen can get help more quickly. It should also be possible for a person who has fallen to call the robot and to send an alert via the SOS button.

2. Visitor control: The robot can measure body temperature via a sensor and thus be used for visitor control in nursing homes. It can also determine whether community or medical masks areworn correctly.

3. Communication of daily information: information entered manually will be communicated to residents by Kompaï on predefined intervals and determinate rounds.

Furthermore, the Kompaï robot can take over the disinfection of entire rooms: thansk to its so-called “trailer”, it drives through the rooms on a previously programmed route and disinfects them through UV light. During this process, it can detect if someone unexpectedly enters the room or crosses the pre-defined route and switches itself off.

The nursing service management and nursing staff listened attentively to the demonstration of the robot’s various functions – the night watch function was deemed to be of particular interest.

What comes next? Currently the voice assistant is being programmed; so far, the robot only “speaks” English and French. For an application in a nursing home in the OBK pilot region, Kompaï has to work on its German language skills. 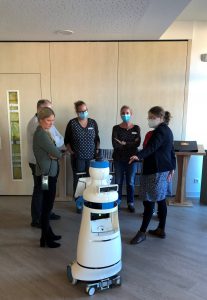